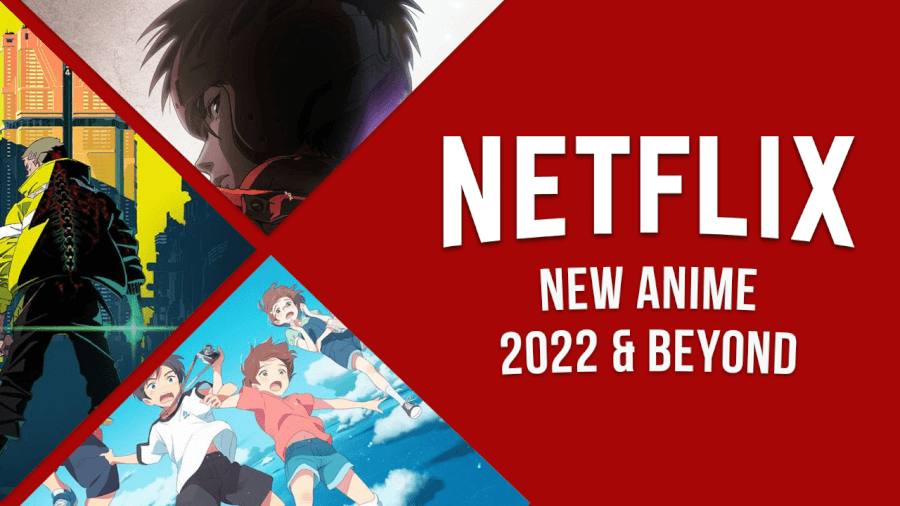 
2021 has been a very busy and exciting year for anime on Netflix, however, the future of anime is equally exciting thanks to all of the announced projects arriving in the near future. 2022 is shaping up to be another exciting year as long-anticipated anime will finally be coming to Netflix.

Below are the anime we know that are coming to Netflix in 2022 and beyond:

Anime Coming to Netflix in 2022

The Orbital Children is a two-part anime special that will see the first three episodes arrive by the end of January, and will follow up with a further 3 episodes in February.

In 2045, two children born on the moon and three kids from Earth try to survive after an accident on their space station leaves them stranded.

For the first time in 11 years, new episodes of Tiger & Bunny is on the way!

Mismatched hero duo Wild Tiger and Barnaby lead the way in keeping the peace and getting sponsors as heroes from around the world enter the fray.

It’s been an extremely long wait to learn what the future held for Ultraman on Netflix. But, we now know that Japan’s greatest Tokusatsu warrior is returning in Spring 2022, three years after the first season debuted.

In the next season of Ultraman, Shinjoro will team up with his fellow Ultramen allies and continue to fight the ensuing threat from the stars.

The very first internationally exclusive anime movie coming to Netflix in 2022 is Child of Kamiari Month. The anime has already debuted in Japan and we can’t wait to see what’s in store for us.

A year after losing her mother, a little girl learns that she must journey across Japan to the annual gathering of gods in the sacred land of Izumo.

Ghost in the Shell is one of the most popular anime franchises of all time, however, the change from its traditional animation to CGI split opinion amongst the anime community.

In the near future, the advancement of technology has led to new a wave of cybercrime by augmented individuals known as “cyberbrains”. To combat the growing number of crimes, full-bodied cyborg Motoko Kusanagi takes charge of the crime-fighting organization known as public security section 9.

And if that wasn’t enough cyberpunk goodness for you, the first character art for Ghost in the Shell just released and it. is. Stunning. pic.twitter.com/Bxxl6kOlQL

Army of the Dead has been one of the biggest releases on Netflix in 2021, and with its release began a new expanded universe for creator Zack Snyder. The animated series will take place before the events of the heist of Army of the Dead, and will take place during the downfall of Las Vegas as Scott Ward, and his team of mercenaries tries to evacuate civilians from the zombie-infested city.

Many of the cast members from the film will be returning to reprise their roles, including Dave Bautista and Ella Purnell. We’ll also see the debut of Joe Manganiello in the franchise, who will lead the series as the voice of Rose.

we’ve got some new faces at the table for the upcoming anime series Army of the Dead: Lost Vegas, and you might just recognize a few…

2021 saw the live-action adaptation of Mami Tsumura’s manga, and 2022 will see the long-awaited anime adaptation.

The release of Cyberpunk was drowned in controversy thanks to the number of bugs and glitches within the game, Which unfortunately left a sour taste in many gamers’ mouths. However, the future of the franchise could be reinvigorated with the release of the anime. Given the incredible art style of Studio Trigger, and the world of Cyberpunk to play with, we’re expecting great things.

A Street Kid trying to survive in a technology and body modification-obsessed city of the future. Having everything to lose, he chooses to stay alive by becoming an Edgerunner a Mercenary outlaw also known as a Cyberpunk.

The film adaptation of the Spriggan manga was released over twenty years ago, and finally, we’re getting an anime series adaptation. It’s been a long time in the making, and we previously expected Spriggan to land on Netflix in 2021, so expect an early 2022 release.

Many years ago an ancient civilization once ruled the Earth but ultimately destroyed itself. Leaving messages to future generations to find, they detail how to use the powerful creations they used. Various factions begin to search for mysterious artifacts in the order to use them against their enemies. Standing in their way is the ARCAM Corporation and their elite squadron of soldiers known as Spriggans.

Thermae Romae Novae was announced a long time ago, and we fully expected the anime to land on Netflix sometime in 2021. However, the anime won’t be available to stream until 2022. It should certainly be worth the wait, and we expect it to make many subscribers laugh.

Roman architect Lucius is troubled by an issue, only to discover an old tunnel that leads to a modern Japanese bathhouse. Inspired by what he’s seen, Lucius decides to open his own spa, naming it, Roma Thermae.

Drifting Home will be the third movie produced by Studio Colorido, which comes after A Whisker Away and Penguin Highway.

Not only will Blood of Zeus be returning for season 2, but it has already been confirmed that the anime will also receive a third season at Netflix.

In the world’s beginning the Gods of Olympus, led by Zeus, defeated the Titans. In the wake of their victory, the last Titan cursed the Gods and unleashed the Giants on the world. Many years later, an army from the East, using the essence of fallen giants to fuel their army’s power, descend upon Greece. On the outskirts of Greece, a commoner, Heron, learns of his heritage as the son of Zeus, and his destiny to save the world.

It was quite a surprise that the world of Guillermo Del Toro’s Pacific Rim was going to be expanded through anime, however, it proved to be very popular amongst subscribers as they eagerly await the release of season 2.

When kaiju rise from the sea and begin to lay waste to Australia, a young teenage boy, Taylor, and his sister, Hayley, use a giant mecha Jaeger to navigate the continent in search of their missing parents.

As one of the biggest MOBA games on the planet, it’s no surprise that an anime adaptation of the story of Dota garnered so much global attention from fans around the world. With a second “book” on the way we can look forward to what the future holds for Davion.

Renowned Dragon Knight and adventurer Davion is devoted to wiping the scourge from the face of the world. He soon becomes embroiled in events he never thought possible when he encounters an eldwurm, and the noble princess Mirana who is on her own secret mission.

Given there are still plenty of bouts to be fought we always thought that Record of Ragnarok would return for a second season.

Winner of Shonen Jump+’s “Million Tag” competition, manga author Naoki Fujita’s breakout manga serialization is being adapted into an anime for Netflix. Very little else is known about the adaptation but we can’t wait to learn more soon.

Netflix is fast becoming no stranger to adapting works of others into anime series. Receiving the next anime adaptation is the Far Cry franchise, which will be centered around Dolf Lazerhawk, a cyborg super soldier who resides in a world of synth-wave dystopia full of corporate control and oppression.

ANNOUNCING – Captain Laserhawk, A Blood Dragon Remix, an adaptation of the bestselling @Ubisoft game is in production with Netflix. #GeekedWeek pic.twitter.com/kJyp8PuRXh

Easily one of the most requested anime adaptations ever, fans of the Devil May Cry franchise are desperate to see an anime adaptation worthy of Dante and Neo. According to producer Adi Shankar, production on the series will begin in 2022.

Certainly one of the most exciting announcements made at Netflix’s TUDUM event, Exception is being helmed by the artist behind Final Fantasy and The Sandman: Dream Hunters illustrator, Yoshitaka Amano.

Here’s your first glimpse at Exception.

The new space horror anime series is based on a new story by Hirotaka Adachi (aka “Otsuichi”), with character designs by Final Fantasy’s Yoshitaka Amano. #GeekedWeek pic.twitter.com/7CWhmNu9O6

Lady Napelon has been in development since early 2020, so we heavily suspect that we’ll learn more about the anime soon, and potentially a reveal of a release date in either 2022 or 2023.

The action fantasy anime follows Sophie, a descendant of Napoleon and leader of the Lady Napoleon organization, who fights for world domination. With her butler, named Butler, and the martial artist master Guy, Sophie travels around the world to collect the three sacred treasures left by Napoleon

The extremely loveable world of Rilakkuma is only getting bigger as the cuddly stop motion bear and his friends go on a brand new adventure to a fun-filled theme park.

Set in the same universe as Legendary Pictures Kong and Godzilla, Skull Island will explore the mythos of Kong further, and the creatures that inhabit the island all while a shipwrecked crew try their best to survive.

Fans of John Wick will be excited to learn that creator Derek Kolstad is currently developing a Splinter Cell anime series for Netflix.

Given the fact that we’ve not seen a new Splinter Cell game since 2013, fans of the franchise will be more than excited to see where the series goes next.

Here’s your first look at the Splinter Cell animated series, an adaptation of the bestselling @Ubisoft game.

Derek Kolstad, creator of the John Wick franchise, is onboard to write the series.
#GeekedWeek pic.twitter.com/c3vjJV0wfR

Very little is currently known about the upcoming Tomb Raider anime series, but given the franchise’s 17 game history, there are many stories ready to be told about the adventures of Lara Croft.

Twilight of the Gods (Season 1) N

Zack Snyder and his wife Deborah Snyder are the ones behind Netflix’s latest anime based around the mythos of the ancient Norse world. We’re still waiting for more details surrounding the plot of the anime, but given how it’s based around the Norse gods, we expect to see a story based around Ragnarok.

What exciting new anime are you looking forward to watching on Netflix in 2022 and beyond? Let us know in the comments below!

‘Single All the Way’ Netflix Christmas Movie: What We Know So...